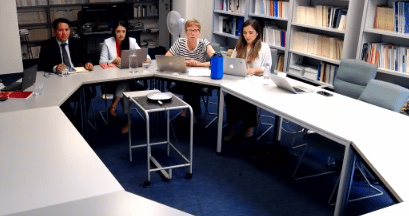 In the framework of the 50th Session of the UN Human Rights Council, the Side Event
Closing the Civic Space in Venezuela: repression and criminalization was held to
expose the need to respect civic spaces for the defense of rights, in order to guarantee the
full freedom of Venezuelan society.

The event organized by Amnesty International, the International Center of Jurists, ISHR,
FIDH, Provea, the Venezuelan Observatory of Social Conflict and the Center for Defenders
and Justice, had as its objective to expose the need for the policies of repression and
harassment to end against Venezuelan activists, which in the end affects the victims and the
common citizen.

Mariana Romero from the Center for Defenders and Justice emphasized the positive impact
that the investigations promoted by the OHCHR High Commissioner and the Fact-Finding
Mission have had, since they have exposed the repressive patterns documented in their
reports and have been warning about situations that must stop.

“International mechanisms are necessary so that these records continue to be documented and made visible with a view to reducing and ending restrictions on civic space.”

Regarding the response by the authorities, Marcos Ponce from the Observatory of Social
Conflict highlighted that there has been none that offers solutions to the citizen demands that
have been registered in recent years.

The OSC has registered the first five months of 2022, some 1,353 demonstrations for labor
rights, 775 that were demanding an improvement in basic services, 596 motivated by the
right to political participation and 476 by social security. There has been no response from
the State to any of them.

Patterns of repression are repeated

Esteban Beltrán, Director of Amnesty International Spain, assures that, based on the
findings of the Calculated Repression Report: Correlation between stigmatization and
arbitrary arrests for political reasons in Venezuela, “There are no coincidences with
regard to the arrests of human rights defenders in Venezuela.”

The pattern begins with stigmatization, explains Beltrán, through public and private media,
web portals, television programs and blogs linked to the National Government, where they
are designated as terrorists and traitors to the country, their work is discredited and then
they proceed to arbitrary arrest.

The Amnesty International study reflects more than 300 stigmatization events and
around 1,200 arbitrary arrests between January 2019 and June 2021.

Beltrán mentioned the case of Javier Tarazona as a clear example of what happens to
human rights defenders in Venezuela who are not guaranteed due process or protection of
physical integrity in custody.

Another pattern highlighted by Mariana Romero, in terms of the policy of criminalizing the
promotion and defense of human rights in Venezuela, is based on the thesis of the internal
enemy; same strategy used by National Security to hinder the documentation and
denunciation work carried out by the activists.

Not only activists and citizens have been victims of threats and arrests, but also legal
professionals, especially lawyers for victims of human rights violations. They have been
harassed, according to Carlos Lusverti of the International Commission of Jurists.
Just as Lusverti denounced a complete lack of complaint mechanisms in the Venezuelan
justice system, there is also the application of a restrictive legal framework that began with a
Law against Hate, then an Anti-Terrorism Law, and today it is intended to approve a draft
Law on Cooperation that limits civil society by all means.

Experts agree on the importance of international mechanisms so that there is a retaining wall
against attacks and aggressions. “These mandates must remain in force,” Romero said, in
the same way that he requested that technical assistance and support continue for victims
both within the country and those who have had to take refuge abroad.